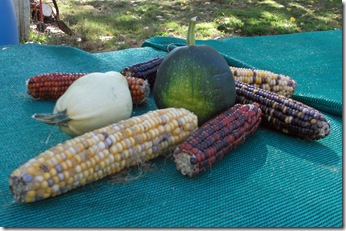 Our annual Pumpkin Carving Party was a great success again!  Although the crowd was small, it was fun to gather together again with pumpkins and great food and conversation. 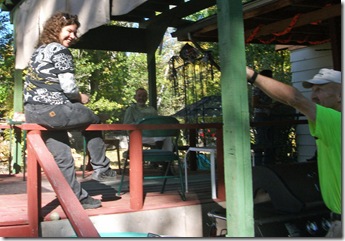 The kids that attend get bigger and older, 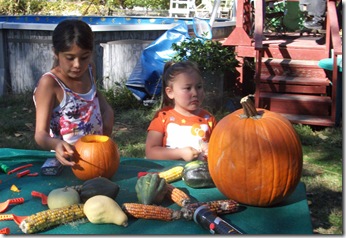 but still enjoy the thrill of carving, not to mention the trampoline and pool table. 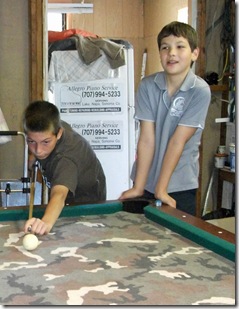 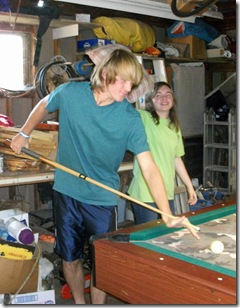 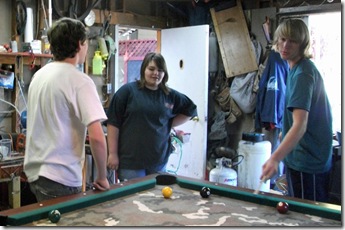 Gypsy Girl had to be tied out to prevent her from jumping all over folks and stealing their food. 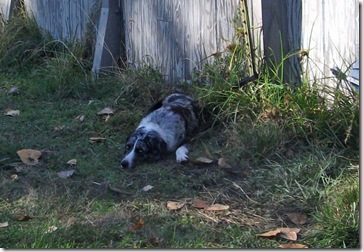 She was an angel the entire afternoon, just laying there and watching.  She didn’t whine or tug on the lead once.  But when we finally let her off, later in the day, she immediately stole a piece of pumpkin pie off of one of the kid’s plates (that he had just put down on the chair for a second!).

The pumpkins were very scary this year, as the kids age. 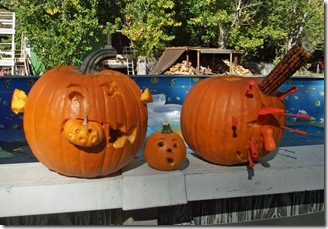 There was some unusually violent ones, a few traditional faces, 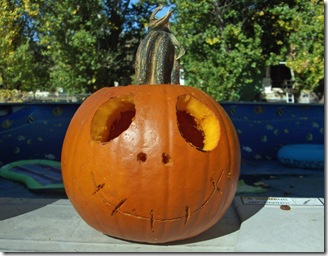 and a couple of downright STRANGE ones.  What imaginations!  No one used any patterns this year, just their brains!  I downloaded a bunch of unusual ideas on a sheet for viewing, then let them at it.  Even Steve carved one. 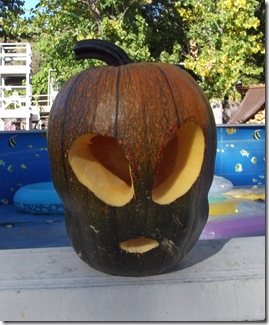 Max’s was one of the more violent ones, complete with a knife he had made a few years ago. 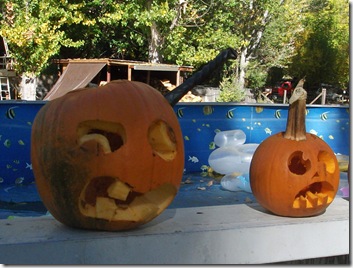 All in all the weather was super, in the 70’s with little wind.  Lots of sun kept all jackets off and everyone seemed comfortable. 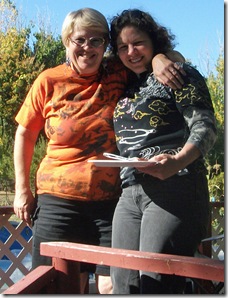 Hope you all have a happy, safe Halloween evening---oh, and don’t forget to watch a scary movie or two---my favorite being “Hocus Pocus!”

Happy Birthday to ME! 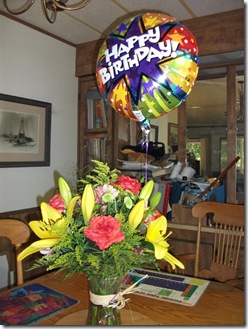 as most of you know, I had a birthday last week.  My older boy, Sean, came home for the weekend so we went out and  had fun, fun, fun! 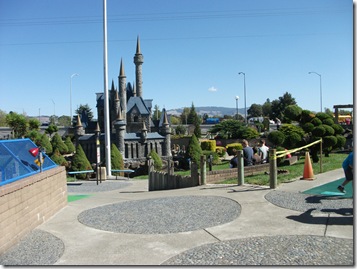 Near Santa Rosa is a franchise called Scandia (see Scandia.com) that has two miniature golf courses, a go-cart raceway, a big arcade full of machines and such and inner tube-boats with built in water guns.   Of course we tried all of them, starting with the putt-putt golf. 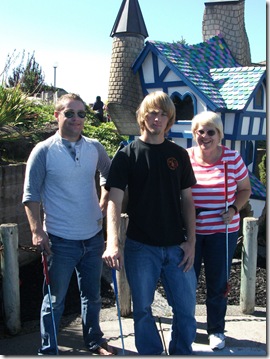 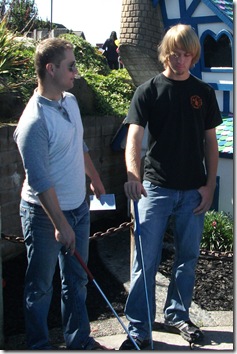 and competitive.  The boys couldn’t resist this test of strength 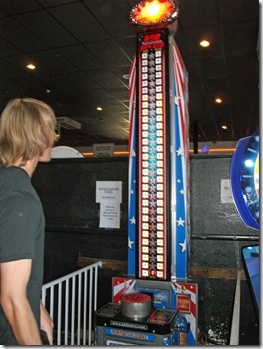 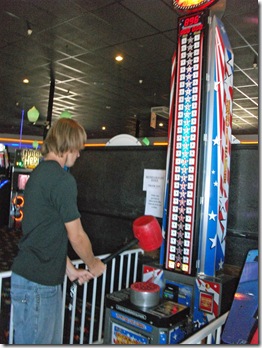 The go-carts were tight to handle 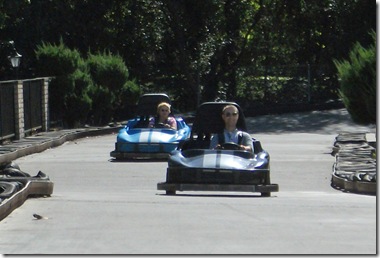 and the course was windy (lots of curves!) but I floored it the whole way 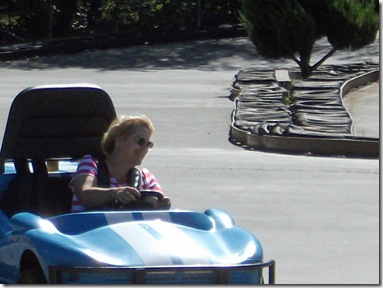 ---and still came in last.  But it was still fun.  Max took it all too seriously 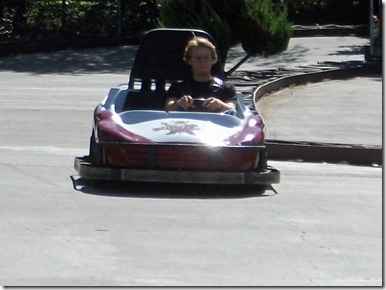 but beat both sean 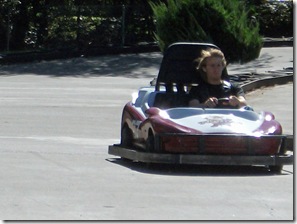 and me.  Steve was the master photographer for us.  Lastly, the water boats 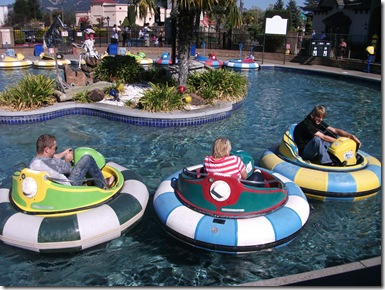 ended up being quite wet 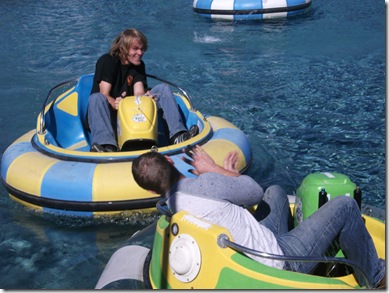 but we had many battles 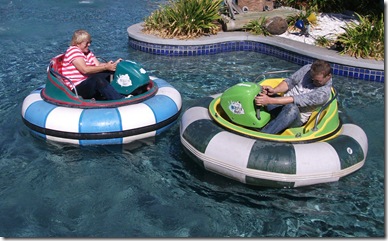 and lots of screeching (the water was cold!).  I managed to get one up onto the photographer too. 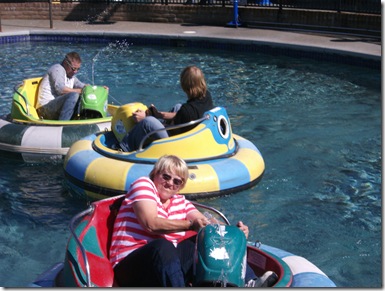 All in all, the day was extremely entertaining but it was good to get into a nice warm car at the end of the afternoon!!!

Check out my published Mystery books...

If you enjoy my writing style, you'll love my two published mystery novels:

When Sammie Lawrence attends her cousin's wedding, she unexpextantly finds herself holding the key to a dangerous puzzle. Desperate criminals are after her, but with the help of her blind Uncle and his dog, along with his teenage nephew, they unravel the mystery with never a dull moment. Sure to please mystery buffs and dog lovers alike.

In this clever ensemble mystery, author Sue Lehman has taken a page from Agatha Christie's "Murder on the Orient Express" and woven an even more complex thriller with many surprises.

You can obtain signed copies of either book through my website: http://www.suealehman.com or through Amazon.com.

A RAT AMONG US
This e-book version of THE RAT is available through nearly any reading device, including your mobile phone and Kindle and your computer. Check out this new Smashwords version if you have a reading device and ENJOY!

Sue Lehman
Check out my bio at suealehman.com